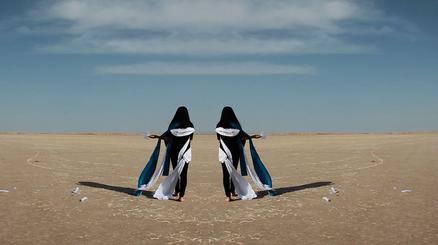 Sama Alshaibi will be participating with video works from her Silsila series in Timeless Fragments: chromatic vibration between water and earth, an exhibition in the Palazzo Granafei-Nervegna, under the patronage of the Brindisi Municipality.

The exhibition unfolds in a logical-critical and psycho-geographical pathway that recalls the places of universal synergies between earth and water, the relationship between ancient and contemporary, between archeology and contemporary art. The lines of thought between sign and symbol, the enigma between fragment and uniqueness, the personal mapping between space perception and surrounding space, between micro and macro, archetype and individual story are explored.

Alshaibi’s Silsila — Arabic for ‘chain’ or ‘link’— is a multi-media project depicting Alshaibi’s seven-year cyclic journey through the significant deserts and endangered water sources of the Middle East and North African region. By linking the performances in the deserts and waters of the historical Islamic world with the nomadic traditions of the region, and the travel journals of the great 14th century Eastern explorer, Ibn Battuta, Alshaibi seeks to unearth a story of continuity within the context of a threatened future.