OTHER
Tammam Azzam at KIBLIX Festival 2017
Shelters of Babylon 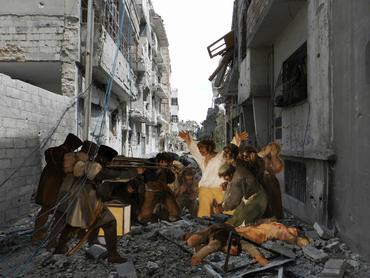 Tammam Azzam will be participating in this year's KIBLIX festival's art exhibition Shelters of Babylon taking place in Maribor, Slovenia. The festival will be host to symposiums, exhibition, performances, workshops, and artistic interventions.

Azzam will be presenting a variety of works, including prints such as Conscript (2012) and Goya’s the 3rd of May 1808 (2012) from his Syrian Museum series, as well as paper collage works on canvas from his Paper series. Azzam’s print works are informed by his interest in the interventionist potential of digital photography and street art as powerful and direct forms of protest that are difficult to suppress.

His newest series, Azzam introduces the use of paper collage, a method new to his practice.  Through the exploration of this new medium, an identity around which the works revolve is slowly developing as the series comes together.

Shelters of Babylon will explore modern migration, borders, communication, tolerance, and other concerns related to the progress and development of modern day society.