OTHER
Khaled Jarrar
Nous Sommes Foot [We Are Football] 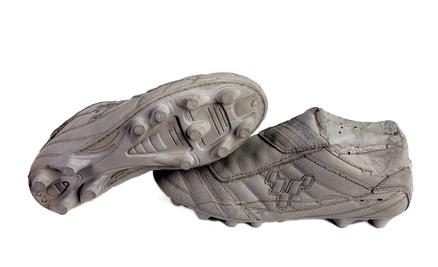 Khaled Jarrar’s Football Shoes (2013) are part of Nous Sommes Foot [We Are Football] opening on 11 October at The Museum of European and Mediterranean Civilisations (MuCEM) in Marseille, France.  The exhibition takes the sport of football – prominent in both the elite neighbourhoods of some the of largest cities and the underprivileged housing estates of others, from Paris, to Marseille, to Istanbul and Athens – along with the sport venues and the economic side of the sport as a focal point. Nous Sommes Foot explores football as a magnifying mirror of the moral values and political ideologies of the twentieth and twenty-first centuries.

Showing 300 pieces, objects, photos, installations, and videos the exhibition pays tribute to football and the popular culture that is part of it in the Mediterranean region and Marseille in particular, which was named 2017’s European Capital of Sport.