OTHER
Samia Halaby
Enfolding and Unfolding: Geometric Abstraction in Motion 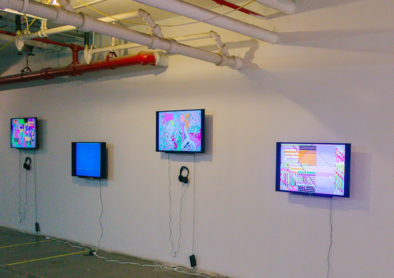 Samia Halaby's rarely seen kinetic paintings are highlighted in Enfolding and Unfolding: Geometric Abstraction in Motion, an exhibition of electronic art that includes computer-based works. Halaby is represented with paintings that she programmed on the Amiga and PC between 1985 and 1995. Curated by Sanaa Almajedi at the School of Visual Arts New York City, the exhibition explores the influence of geometric abstraction in Islamic art, particularly how it developed in North Africa and West Asia, on experimental artists from the Arab world. Featured alongside Halaby are Ghassan Ghaib and Himat Mohammed Ali.

Halaby will be performing as part of the Kinetic Painting Group (with musicians Kevin Nathaniel Hylton and Hasan Bakr) on 21 April at 6pm as part of the show’s opening events. The abstract painter founded the group in the 1990s in New York City, where it regularly performed at venues such as Lincoln Center. Later they travelled to the Arab world, where they played at Le Pont Gallery in Aleppo in addition to other local art spaces.

Enfolding and Unfolding: Geometric Abstraction in Motion is on view until 14 May.