OTHER
Sama Alshaibi on Ibraaz Channel 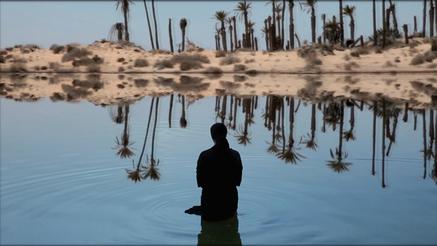 Sama Alshaibi’s Dhikr, Baraka, Muraqaba and Tariqah are currently highlighted on Ibraaz, the premier online platform for contemporary art from the Middle East and North Africa. Streaming on Ibraaz’s digital channel, these experimental video works are part of Alshaibi’s Silsila series (2009-2016), a multidisciplinary project that traces the historical route of fourteenth-century Moroccan explorer Ibn Battuta, who traveled across North Africa and West Asia to the Maldives in search of Islamic cultural continuity. In the artist’s videos, endangered bodies of water signal a region in crisis while performative gestures by anonymous figures allude to the spiritual dimensions of communities that have remained connected to their respective environments over centuries, as generation after generation adapts to the changing topography of a region in flux.

Last year, Aperture (New York) published Sand Rushes In, a monograph on Alshaibi’s work that comprises most of the Silsila project. The series was also prominently featured in Collapse, the artist’s large-scale solo exhibition at Ayyam Gallery Dubai (11, Alserkal Avenue) in November 2015. More recently, Silsila is the subject of a travelling exhibition curated by Claire C. Carter of the Scottsdale Museum of Contemporary Art, where it was shown in June, and will open at the Herbert F. Johnson Museum of Art at Cornell University in 2017.