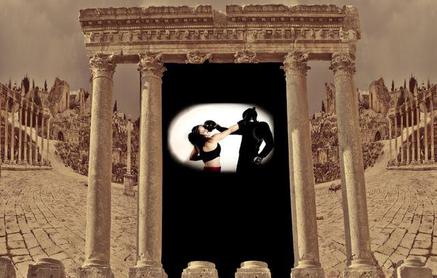 Sama Alshaibi will participate in the 2016 edition of the New York Light Festival, a curated series of screenings and light projections that is organised annually in the city’s DUMBO district. Since 2014, international artists have been invited to format their works for a public showing after dark that takes place at the Manhattan Bridge.

Selected by writer, scholar, and curator Erin Joyce, this year’s lineup is titled LIGHT YEAR 16: THIS LAND IS YOUR LAND, and presents various artistic explorations of ‘the dynamism of diasporic communities, the history of violence against diasporic individuals, and the profane abuse of assaultive power that manifests in governmental policies against immigrant or “unwanted groups.”’ Alshaibi is represented with Thowra (2011) and vs. The Empire (2011), video works that, despite containing divergent concepts and imagery, address the ongoing power struggles that define the political landscape of the modern Middle East. She appears alongside other internationally recognised artists such as Basma Alsharif.

Alshaibi’s works will be projected onto the side of the Manhattan Bridge on 4 August from dusk until 10 pm.