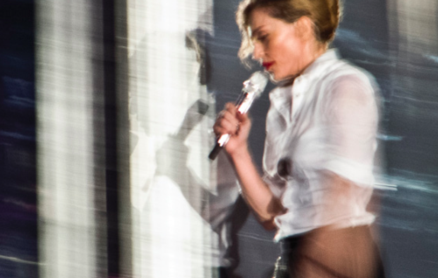 Ayyam Projects is pleased to announce Ecstatic Moments, the forthcoming solo exhibition of Dubai-based photographer Nairy Shahinian. Featuring an ongoing body of work begun in 2010, the exhibition will introduce Lebanese viewers to Shahinian’s experimental practice, which approaches photography as both an immersive medium and an evolving site of investigation. The conceptual premise of the series—from which the exhibition takes its title—is the experience of attending live concerts and the heightened yet fleeting connections that occur between a musician or band and their audience.

Translating these sonic exchanges into visual impressions, the photographer captures a range of artists and chooses her subjects with only intuition as her guide, whether she is familiar with a musician or hearing them for the first time. With her camera in hand, Shahinian attempts to render the intensification of an unfolding scene as a still image the moment she is inspired by a particular performance—when her perceptive proximity to an artist peaks, becoming profound, and music takes hold of the senses.

The resulting images nearly obscure the identities of artists like Madonna, Metallica, and Roger Waters, who appear as apparitions of light and colour when photographed in mid action, their emitted energy defying the shutter speed of the camera.

In a number of 2013 works, for example, Shahinian photographs Bjork from a distance against the backdrop of a dimly lit stage at a concert in Germany. The Icelandic singer is shown illuminated by a string of lights that give her a neon glow, an effect that exaggerates her alien-like appearance topped by an elaborate headdress. Shahinian also captures the artist at close range: as Bjork moves, her yellowish-green outline is blurred at the edges. Her swaying movement, resembling a firefly at night that makes her way through the darkness, punctures the pitch-black venue. Through the photographer’s lens, Bjork is described as a force that defines space and paces time.

Nairy Shahinian is an Armenian artist based in Dubai whose artistic practice approaches photography as a never-ending process of discovery. Shahinian often employs experimental techniques as investigative tools, allowing her to intimately document her immediate surroundings and experiences.

Shahinian’s knowledge of the medium was developed at a young age in the Damascus studio of her late father, Vahe, a leading photographer in Syria. Her initial artistic training took place while assisting him with various projects across the country, including a series of works that documents its historical sites. While continuing to work at her father’s lab, she studied drawing at the atelier of Syrian painter Adnan Abdulrahman, and received a Professional Photography Diploma from New York Institute of Photography in 2008. She then traveled to Dubai, where she worked as an assistant photographer to commercial photographers Phil Baber and Tommy Morris. In recent years, Shahinian has executed several photographic series that have been shown at international art spaces and events.

Founded in 2014, Ayyam Projects seeks to provide greater visibility to experimental works by regional and international artists. A new platform for contemporary art in the Middle East, Ayyam Projects highlights conceptual art, installation, video, and digital photography. As the sister space to Ayyam Gallery Beirut, its regular programming focuses on recent developments in art that are taking place outside of the mainstream and beyond the limits of traditional media.