OTHER
Samia Halaby amongst "The World’s 100 Most Powerful Arab Women"
ArabianBusiness.com 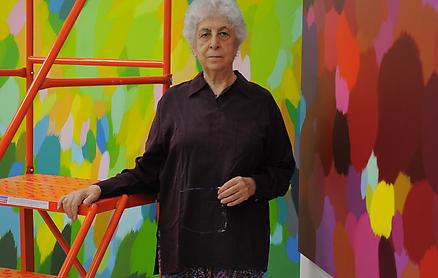 Palestinian abstract expressionist painter Samia Halaby has been named amongst "The World’s 100 Most Powerful Arab Women" by Arabian Business in March 2014. A long serving artist and professor, Halaby was born in Jerusalem in 1936 and is now based in the United States. Listed at #10, Halaby also has the distinction of being the first female art professor at the Yale School of Art in 1972.

A recent monograph Samia Halaby, Five Decades of Painting and Innovation was published by Booth-Clibborn Editions 2014, while a retrospective of the artist’s works is on view at Ayyam Gallery Al Quoz, 19 February to 30 April. Samia will be signing copies of her new monograph during Alserkal Galleries Night on 17 March at 5pm, at Ayyam Gallery Dubai (Al Quoz).