Syrian painter Kais Salman’s New Wave (2012), which comments on today’s rampant consumerism and commercialism with a disfigured heroine, sold for twice its estimated price at over $21,000. She Loves Me, She Loves Me Not (2012), Kuwaiti artist Shurooq Amin’s satirical take on prescribed gender roles and the secret lives of a conservative state, sold for over twice its estimate at nearly $14,000.

A highlight for the May auction included a rare collection of paintings by modern and contemporary Syrian pioneers, boasting leading figures such as Fateh Moudarres, Louay Kayyali, and Moustafa Fathi. An untitled work by Fathi, employing the late artist’s signature wood block stamp, sold at three times its estimate at $90,000. The pièce de résistance of the evening was Kayyali’s Boats, a brooding still life executed during a seminal 1960s period that sold well above estimate at $156,000.

Enthusiastic bidding generated a dynamic ambiance for those bidding as well onlookers. Building on the increasing levels of new attendees, record-breaking sales, and a buzzing salesroom of last night’s sale, the twenty-first edition of The Young Collectors Auction will be held at Ayyam Gallery (Al Quoz) in September 2014. 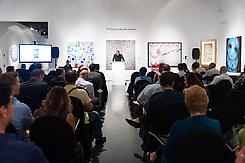